Freemen’s Sixth Form proudly hosted our first Model United Nations Conference with Glyn School, which we feel was a great success owing to the high level of stimulating debate performed throughout the many committees. Issues discussed ranged from cyber-security, the crisis of overpopulation and the fashion choices of Tom Cupis, one of the Freemen’s committee chairs. 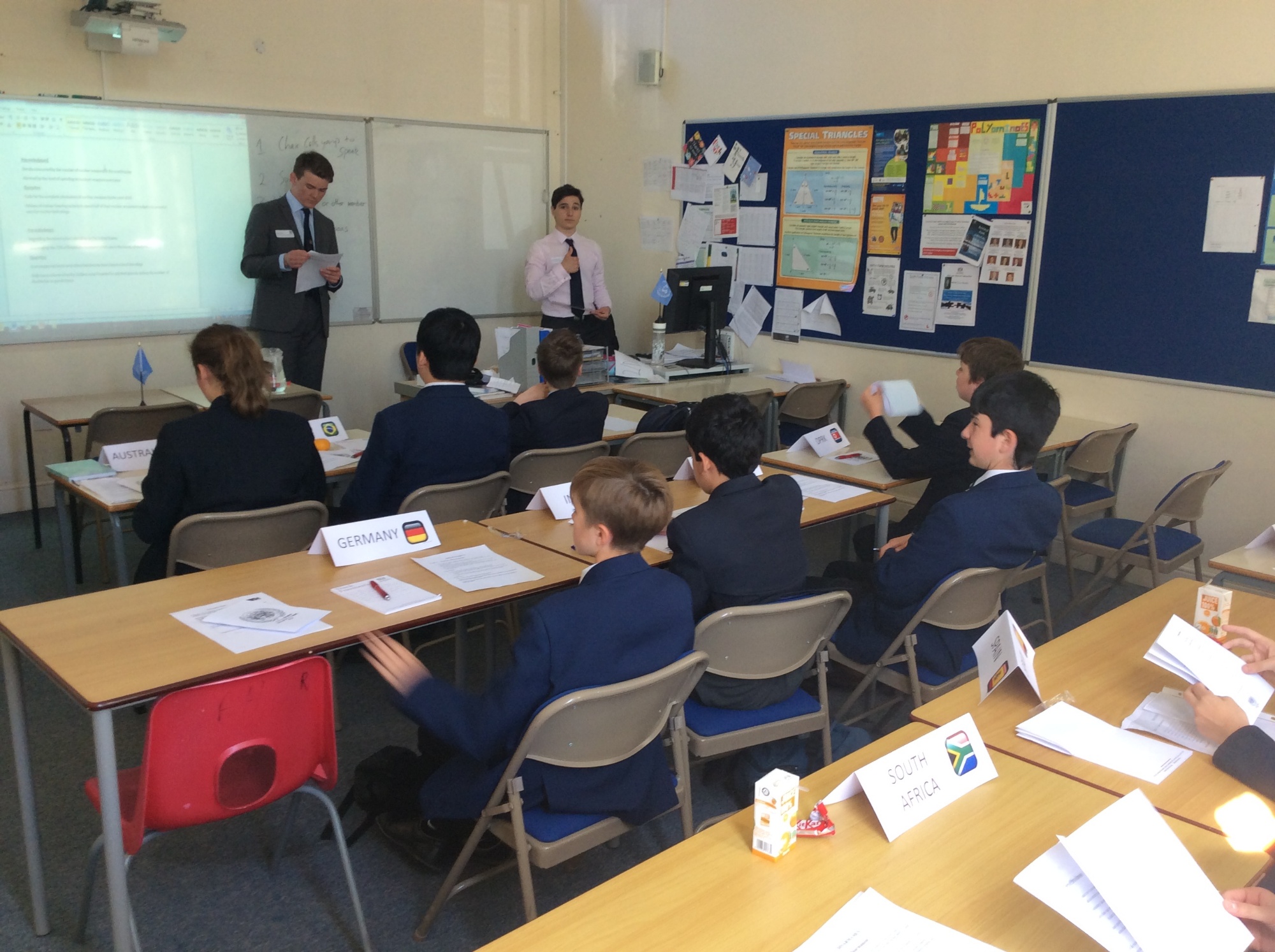 The day started with a welcoming ceremony held in our Ferndale Theatre, which set the tone for the rest of the day as one to be focused on peace, education and tolerance. The opening speeches were led by Scarlett Robinson reading the preamble to the UN Charter and Madeline Brown reading an inspiring letter from Sir Kieran Prendergast, which was addressed specifically for the young people of Freemen's and Glyn.

I am always pleased and impressed when young people gather together to hold a model UN. Never forget that as the next generation you have the challenge to make the world a better place. What you lack in experience you make up for with ideals. I urge you never to lose those ideals, never to become cynical or defeatist.

Today’s world faces enormous and ever changing challenges, including in the area of international peace and security. I believe very firmly that the United Nations has a central role in meeting those challenges.

The UN was set up in 1945 with the noble aim of saving future generations ‘from the scourge of war, which twice in our lifetime has brought untold sorrow to mankind’, as well as to ‘regain faith in fundamental human rights, in the dignity and worth of the human person, in the equal rights of men and women and nations large and small’.

Those objectives are as valid today as they were in 1945. All governments have a duty to pursue their national interests. But who can doubt that national interests are ultimately best served by building and preserving a system of collective security and international rule of law. The Security Council is the body with supreme responsibility under the UN Charter for the maintenance of international peace and security. Britain is a Permanent Member of the Council, which gives us special rights but also special responsibilities.

Human beings and governments are fallible and prone to error. We have collectively often fallen far short of the founding principles of the United Nations. But we must keep trying, because the alternative is a system of international anarchy, where might is right. In dealing with severe threats such as terrorism and other extremist acts we must uphold our standards of democracy, human rights and freedoms: otherwise we risk ending up little better than the extremists.

It’s not easy or straightforward, and I am sure the challenges involved will become clear during this model United Nations. I wish you all a lively and stimulating discussion.

After some words of encouragement from our MUN coordinator, Mrs Smith, and the Deputy Head, Mr Bachelor, the Freemen’s and Glyn’s students disbanded into their individual committees, where, once the ice had been broken and the students had settled, the day of debate began!

The aim of the morning was to introduce the younger students to the procedures, etiquette and formalities of the UN such as terms of address and the use of points of information and teach them how to structure their arguments in debate. We were extremely pleased to see that everyone embraced the challenges presented to them with high levels of enthusiasm and great consideration for the issues at hand. 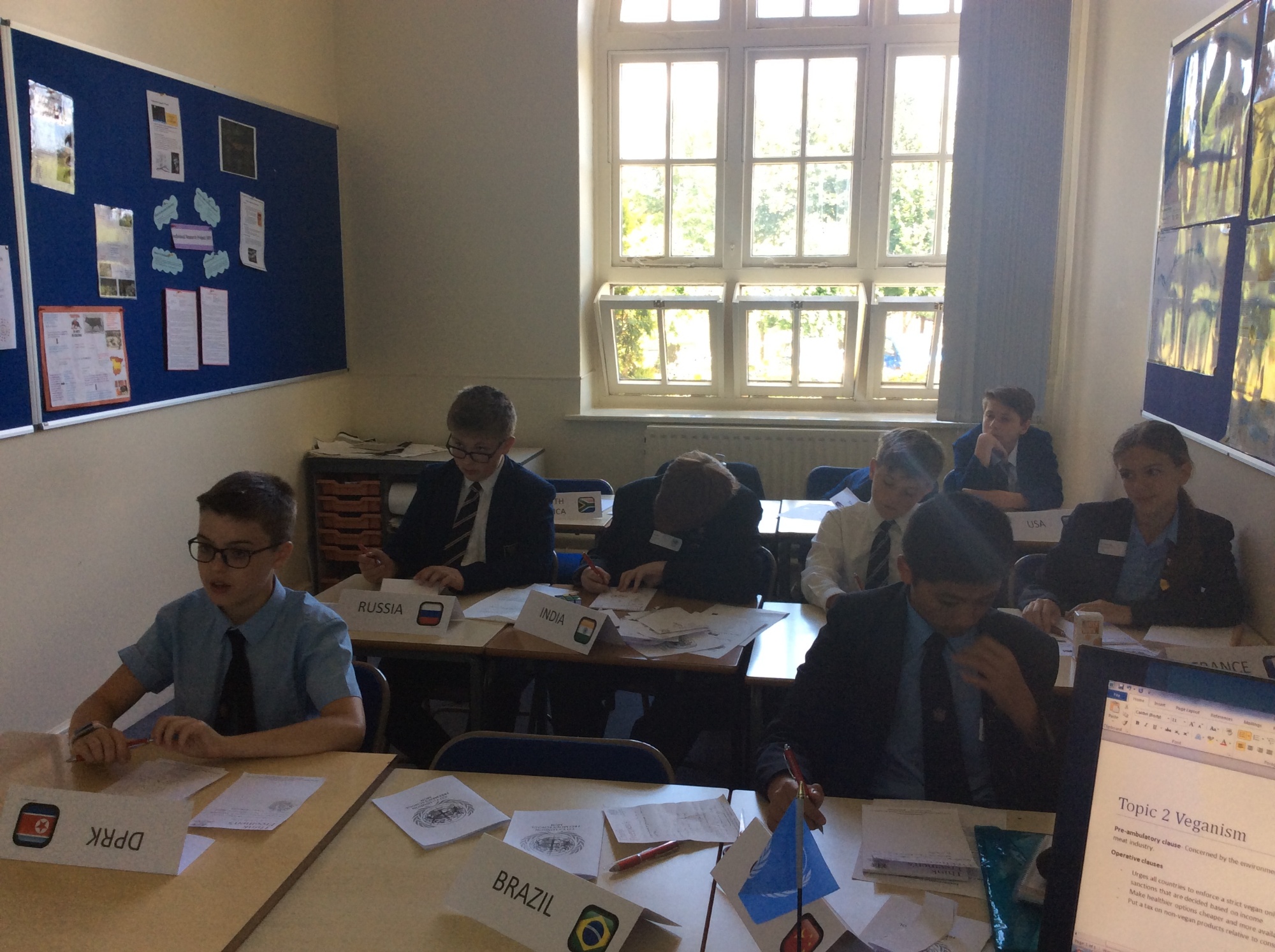 Some of the highlights from the day include the insightful solutions reached by the Security Council, whose main topic of debate was the increasing threat of extremism. Such resolutions came about from respectful cooperation and mature discussion which, owing to the sensitive and challenging nature of the subject, we were delighted to see. Additionally, the Disarmament Committee’s unanimous decision to invade Russia, alongside the Environment Committees’ policy to put all cattle farms in bubbles under the sea, demonstrates the innovative thinking and humour of our future world leaders.

Overall we were thoroughly impressed by the passion and commitment of each and every delegate. We hope that such an experience was a helpful introduction to MUN and everyone had an enjoyable day of fruitful debate and we look forward to many more.