Gold medal for Isaac at the ISKA World Championships 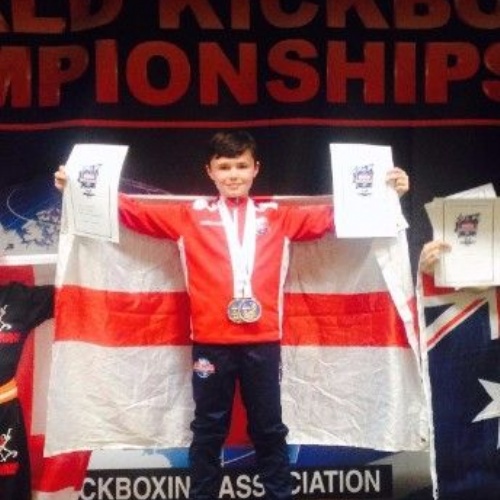 Isaac Shalgosky in L2 has won a gold medal in the 7-12 Freestyle Weapons category at the ISKA World Championships in Athens on the 1st June.

He also managed to win a Silver medal in the 13-16 Freestyle Weapons category despite being only nine.

We managed to catch up with Isaac after the championship and this is what he had  to say;

Isaac, how was the championship?

It was fun.   The standard was quite high, but sadly there wasn’t a very big turnout for my category (7-12 Freestyle Weapons category). There were only about five people for my category but they had a really high standard.

How did you manage to win this competition?

Well, you have a routine of moves, and depending on how hard the tricks are, and how much intensity you have, the three judges give you a score and then the person with the highest score wins.

How long have you done freestyle for?

I have done the whole martial arts thing for about five years, but I started Bo staff, which is what my weapon is called like two years after I started martial arts, so I have been doing this for about three or four years

How did you choose your weapon?

I chose Bo staff because it is quite a good one to start with and also it is very good to do tricks with.  So there are three main weapons, you have Bo staff, which is the one I have, you can also have a sword, and then you have nunchucks, which are basically a quarter of the length of my stick is on one end and then attached to a chain is another quarter.

Did you ever hit yourself with your weapon?

Yes, I did. When I started I wore a crash helmet as you can hurt yourself with the stick but then as I got better I worked up the confidence to take it off and worked on from there.

Why did you choose this particular martial arts discipline?

I just saw a demonstration of it on a village day one day, when I was 3 almost 4 and I really liked it. Unfortunately, they told us they couldn’t take anyone under 5. Luckily my Mum and Dad found another club where I could do it from four and up. I really liked it when I saw the demonstration on the village day so I definitely wanted to carry on, and I will continue to carry it on.

Can you share with us what is your favourite move?

I have a favourite move; I am working on a signature move as all good Bo staffers work on a signature move. My signature move is going to be, tip the Bo staff and then spin it into the air and catch it on the back of my neck. It is hard, but we are getting quite close to it, soon I might probably be known for that move.

Do you have any advice for other kids that might want to try this?

When you get hit by it, don’t be like; Oh I never want to do that again it really hurts.

You need to keep going because when you get hit by it eventually, you will manage to do that trick.
I once had a trick and it took me, about three or four months to learn and I have known people that took years to learn a trick. So you don’t give up with those tricks, and that is how you become a good martial artist.

What is next for you?

Probably the US Open, the biggest competition in the world. But that is going to take me at least a couple of years practice.