The students spent the day looking at the role of the brain in many behaviours including schizophrenia, OCD and offending behaviour. They also covered basic brain anatomy and neuroplasticity – the ability of the brain to rewire following trauma or illness.

During the workshop students carried out a dissection of sheep’s brain. Then continued by looking at the key structures in a brain, how neurochemicals affect the brain and the effect of drugs such as cannabis and ketamine on the brain.

Dr Sutton looked at the damaged brain, including open brain stimulation and raised interesting questions such as whether or not there is such thing as a criminal brain. 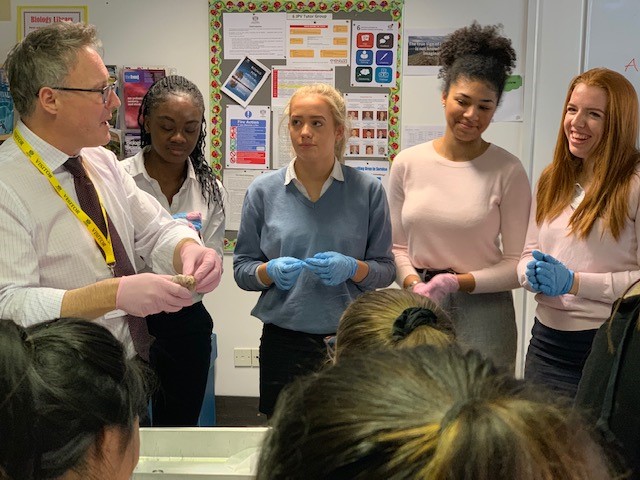 “Absolutely fascinating! It made me incredibly excited to study Psychology and Neuroscience at degree level.”

“The best part of the day was learning about the effect that drugs can have on the brain. It really opened my eyes to the effect things can have on us when we don’t notice it. Dr Sutton was so engaging and I learnt a lot from the day.”

“Dr Sutton was an extremely engaging and passionate lecturer who made the day very interesting and exciting, specifically the brain dissection.”

“Really informative and enjoyable day. I learnt so much new information from mental health to drugs and parts of the brain from actual dissections. I would love to have another session with Dr Sutton.”

Joanna Vinall, Head of Psychology, organised the day and commented

“The whole day was incredibly interesting. Dr Sutton discussed a wide variety of issues in neuroscience - everything from the lastest research in neurobionics and the damage recreational drugs can do to our brains, to the role of neurotransmitters and brain dysfunction in schizophrenia and offending behaviour. A lot of the material was undergraduate level but Dr Sutton was so engaging that the students were gripped throughout the day. One of the highlights was the dissection of a sheep's brain, with students being able to hold the brain themselves and clearly seeing the different parts of the brain that they have learnt about in the classroom.”

Thank you Dr Sutton for your time and insights into brain behaviours.