The under 15 boys represented Freemen's last week with an enormous amount of pride, hard work and skill and caused some major upsets in English Schoolboy rugby. The VIIs teams not only won trophies but represented the school with distinction.

The boys were Cup final runners-up at both tournaments we played at and due to this created a shockwave throughout English Schoolboy rugby. The two tournaments we played in were the Surrey U15 VIIs held at Trinity, Whiftgift on Thursday 16th March and the prestigious John Pieroni Wimbledon VIIs, on Sunday 19th March.

Surrey VIIs Round up:
The boys were in a tough group on paper for this tournament but ended up winning the group and having the highest scoring difference in the pool stages of the tournament with 153 points in only 4 games. Additionally, we beat Whitgift 35-0 with some outstanding performances from Nick John, Joe Harmsworth, Jack Hamilton, Sam Holder and Erin Warnock.

In the Quarter finals we played a very good Epsom College team and beat them convincingly 38-19. This game set the standard of how we wanted to play and gave the whole squad a belief we could beat these big rugby-playing schools. In the semi finals we played a Cranleigh School team filled with Harlequin and London Irish Academy players and we beat them convincingly 26-15. Jack Hamilton was absolutely outstanding. The sportsmanship illustrated by the whole team in this game was fantastic. Although the boys were over the moon about making the final they showed an enormous amount of humility and respect for the devastated Cranleigh boys who also played extremely well also.

In the Final we played a very close match against a Dulwich team who had the bounce of the ball in the first half and suffocated our possession. The Freemen's boys rallied very well in the second half and unfortunately time was against us but the boys never gave up . The attitude, commitment and team work shown was inspiring.
The Freemen boys after this final, although deeply upset they didn't win, now had a belief and a desire to experience high intensity, high quality rugby like this again. Notably, all the boys were very conscious about how sore their bodies felt but wanted the chance to represent the School at the John Pieroni Wimbledon VIIs. And therefore their dedication to their own recovery to play again was an exceptional testament to their desire to represent Freemen's at sport.

John Pieroni Wimbledon 7s Round up:
Again, we were placed in a very strong group for this tournament but ended up winning and having the highest scoring difference in the pool stages of the tournament. Once again, the boys started the tournament where we had left off at the Surrey VIIs, with a BANG! We beat a very impressive Eton College 21-7. and again we beat a Whitgift A team convincingly 33-7 with some outstanding performances, by Sam Holder, Oscar Wood, Jack Hamilton and Nick John. Because we topped our group we were through to the Cup Semi-finals again.

In the semi finals we played the biggest and most physical team we have ever played, Wimbledon College. We won 17-12. Huge was respect was heard on the sidelines with coaches, parents & other teams saying that they had never seen such an amazing U15 VIIs game. Spectators commented that both teams played with superb respect for each other but also with tremendous skill level and physicality. Special mention must go to Nick John, Joe Harmsworth and Jack Hamilton were excellent!

Once again, we met Dulwich in the final and unfortunately we lost to them 26-12.  They were extremely impressive and our boys were absolutely exhausted by this point, after the tough encounter with Wimbledon college in the semi. Not to say though, the boys definitely gave 100%. The Dulwich coach after the game mentioned his side had won all their VIIs matches and said that this Freemen's VIIs side is by far the best they have ever played and the only school to have scored 2 tries against them in a game! 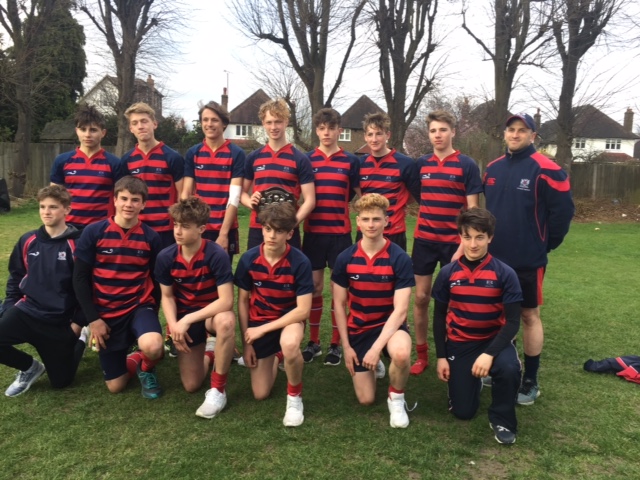