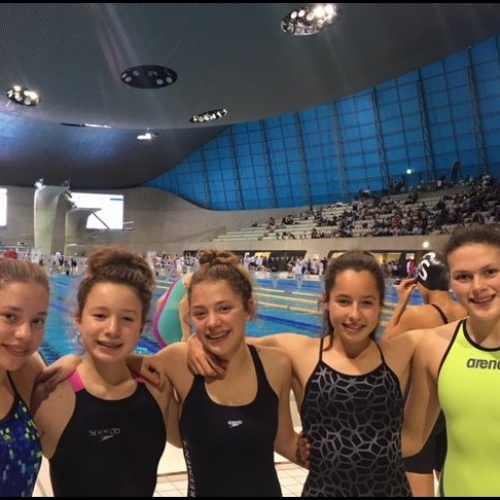 On Saturday 18 November Freemen’s Intermediate girls swim team competed in the 4 x 50m Freestyle and Medley Team Relays. They had qualified for both finals in the Surrey County Competition rounds, coming first in the medley relay and third in the freestyle relay. In the morning the team, consisting of I. Fakkel, Z. Agius, J. Lawrence, A. Hartley, and reserve, E. Hartley arrived at The London Aquatic Centre for their water familiarisation session, to prepare for the races later in the afternoon. Thirty teams were competing for a place in the ten team grand final, with strong competition, especially from the South-West of England. In the freestyle relay we were placed 24th overall which was an improvement of two places from our initial ranking. Later in the day, in the medley relay, we improved from 18th place to 15th. This is a great improvement as the races were long course, not short course, relays. As an overall achievement the girls need to be congratulated on their successes as they remained ranked first in Surrey for the medley relay and rose to second in Surrey for the freestyle relay.