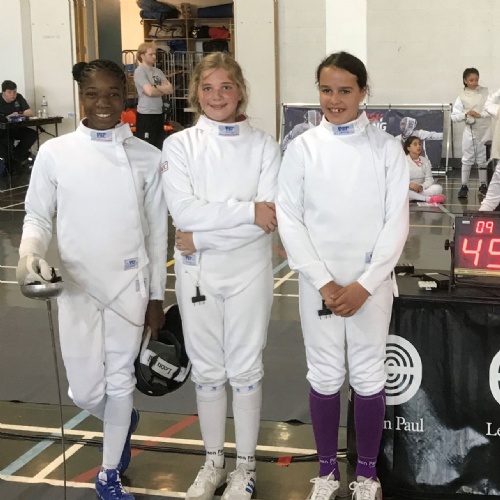 While much of the country watched the Royal Wedding on Saturday, the British School Team Fencing Championships were also taking place and Freemen's had a team entered in the Girls epee event.  Representing Freemen's were E. Dernika (L3), J. Barnor (U3) and S. Arter(U3), who all moved up to the U13 event this year having won the U11 title in 2017.

Team events comprise 9 fights of 3 minutes each per match, each team member fencing each member of the opposing team in a relay to a maximum of 45 points.  Matches can be very exciting with the lead often switching several times.

The first match was against a More House School team that included the national number one ranked fencer from 2017. This proved to be the closest match of the opening ‘poule’ (round-robin) with the Freemen's team all fighting well to establish an early lead; however the lead was slowly reduced to a single point going into the last fight where J. Barnor anchored brilliantly to gain the win 43-39.

After two further victories in the opening round Freemen's were the top seed, which set up a semi-final win in the elimination round. Then the stage was set for a rematch with More House in the final.  This time the scoring was even tighter - in all the lead changed four times in the match. With 3 of the 9 fights remaining Freemen's trailed by one point, then after good scoring by E. Dernika to restore the lead and S. Arter to extend it, J. Barnor withstood some ferocious attacks and scored the seven points needed to end the fight and secure the victory 45-42.

Each team member put in excellent individual performances.  Better still though was the team effort - when any one fencer struggled or had a loss, the other two fencers were able to make up and overturn the deficit, with E. Dernika, S. Arter & J. Barnor all putting in great performances over the course of the day. Most of their opponents were from Year 8, whereas the Freemen's team comprised two from Year 7 and one from Year 6, so all three hope to be back to defend their title in the same event next year!