Freemen's U12B team have won the Blackpool Tournament 2017 Plate despite competing against A teams from Edinburgh, Malvern and local to Lancashire.

The team played in five matches in the sunny but bitterly cold weather that Blackpool has often thrown at us over the years, but remained undaunted. They knew if they played well as a team, supporting each other with every move that they were as good as the A teams they were competing against. 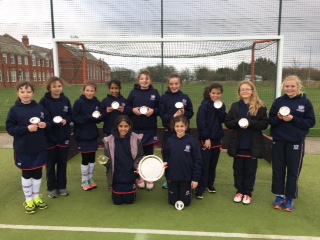 The final two matches were keenly fought with just one goal separating each team’s final score – and Freemen's U12B were the victors each time - beating The Chase School, Malvern in the Semi-final and Rossall School, Fleetwood in the final.

It was a great team effort with Goalkeeper Gabi Sujecka being named  'player of the tournament'.