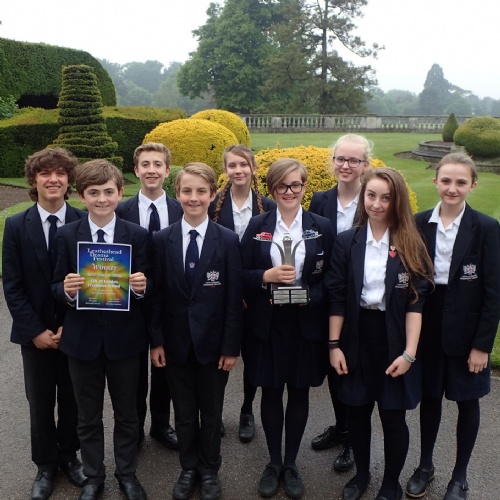 Congratulations to a group of Freemen’s Upper 4 students who won Best Play at the recent Leatherhead Drama Festival!

The Drama Club students initially brainstormed several different play ideas before deciding upon a modernised version of the Greek play ‘Persephone’. The group then, under the watchful supervision of Miss Warburton, Mr Powell and Miss Barrowman, devised and wrote the play which explored the family drama behind the abduction of Persephone and the creation of the four seasons.

Taking on different roles in each scene, from the evil boggle creatures to Hades himself, whilst incorporating various dance elements to reflect the mood on stage, made for a highly unique and exciting production. After being announced as winners of Best Play in the junior section of the Leatherhead Drama Festival, the students were asked to perform once more at the Awards Night. The opportunity to perform twice was something the students were particularly thrilled about, Harry Haynes commented: “It was a really enjoyable experience being able to perform at the Leatherhead Theatre twice and we definitely felt even more confident on stage the second time around – it was a really good experience.”

Not only did the students win on the night but Miss Warburton and Mr Powell were also jointly awarded the Best Director prize, with the School also being nominated for a third prize in recognition of their contribution to the Festival. As well as getting the chance to perform to an audience twice, the students also had the opportunity to learn more about the other aspects of putting on a production including make-up and costume, with student, Tabitha Sunderland, describing the experience as: “a real eye-opener of what it would be like working in theatre.”

The Drama department is busy once more with rehearsals underway for Little Shop of Horrors that will debut in September 2018 – we cannot wait to see what the staff and students will produce!