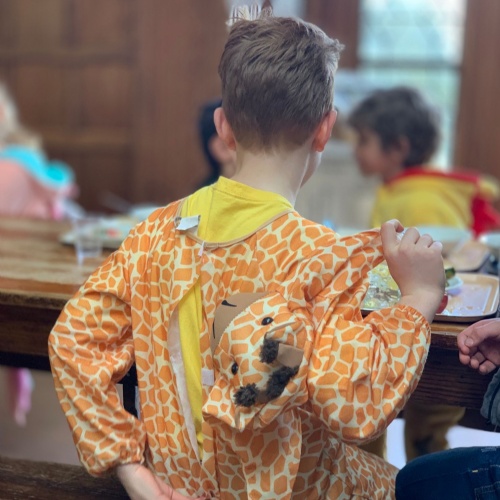 A fabulous fundraising week was organised by a team of Freemen's Sixth Form students, with activities involving the whole school, in support of the School's nominated charities.

This year, RAG Week kicked-off with the Sixth Form students sporting their finest festival outfits adorned with bright colours and glitter, then enjoying lots of doughnuts at break. The Junior's wizardry knowledge was put to the test in a Harry Potter quiz over lunchtime, with the winning team being given some Easter eggs. While, over in the Haywood Centre a lot of the Seniors and Sixth Formers were wracking their brains to answer some general knowledge questions in the Big Quiz.

The following day, the whole School came dressed in House colours with some of the Upper Sixth pupils dressed as superheroes, various fruit and fictional characters in their House colours led by the house captains wearing fat suits.  At break, the Juniors enjoyed throwing wet sponges at some of their teachers, who did their best to avoid a soaking!

Wednesday brought the Juniors into School dressed up as a multitude of different animals in support of Born Free; even Mr Robinson got involved by wearing a lion hat. At break, the Junior Foyer was awash with cakes donated by the students, then being sold by the Sixth Form students.

On Thursday, the ​​​​​​Sixth Form came dressed in their childhood job ambitions, with outfits ranging from builders, princesses, footballers and even a duck! At break, lots of cakes were sold to the Seniors and Sixth Form, followed by traditional sports day fun during lunch for the Juniors. All the children that came to the sports hall were split into different teams and moved around a circuit of fun races like skipping and egg 'n' spoon.

Rag Week concluded with the Seniors coming in dressed up as famous historical figures for the day. At lunch, the Juniors were getting tangled together in games of Twister, while the Seniors and Sixth Form gathered in The Ferndale Theatre to watch their peers in ‘Take me out’. Lots of laughs erupted from both locations, that’s for sure.

Despite the inclement weather, RAG Week was an incredible success in which we raised a total of £1,590.33,  split between our four school charities: Five Talents, MEDyARTE foundation, Born Free and Canine partners. Thank you to all the support received from pupils and staff alike, right across the School community in raising funds for our deserving charities.