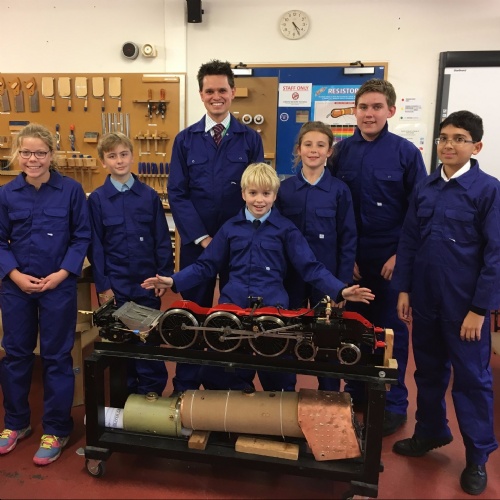 The Steam Engineers Club are steaming ahead in their project to re-build a steam engine donated by Old Free, Barry Purcell.

Barry Purcell very kindly donated a part-built 5" gauge model Britannia steam engine to the School's Design & Technology department. For Design & Technology teacher, Mr Max Hicks, it has always been a life goal of his to build an engine of this magnitude and complexity and the department were thrilled to receive the engine. It is expected to take several years for students to complete but the newly formed Steam Engineers Club have been making great headway with the project.

Mr Max Hicks said of the group: "The Steam Engineers Club has been running for several weeks now and we are pleased to report that after six hours of effort adjusting the driving gear (the rods on the side of a steam engine that link the wheels) and valves we have been able to run the pistons on compressed air. A moment of great excitement for all! We can now proceed to construction and painting of the smoke box (the part with the funnel)."