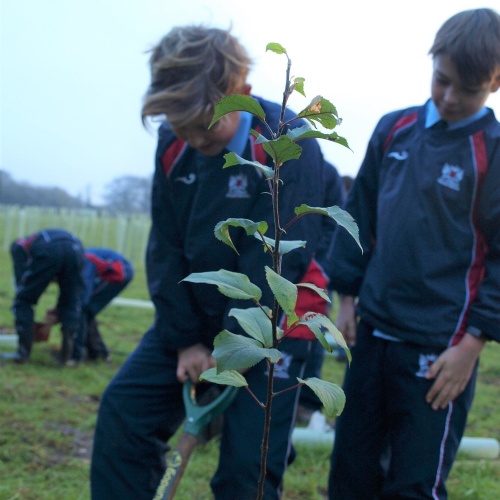 On a crisp November afternoon with the last of frost still evident, a group of L3 pupils visited the nearby Woodland Trust First World War Centenary Wood in Langley Vale, to take part in a symbolic tree-planting to honour former Freemen’s pupils who served their country. With its breath-taking views of the North Downs, the site has been transformed into a living memorial to those who sacrificed their lives in the First World War.

With its location at the foot of Epsom Downs, the Centenary Wood is ideally situated given the association with the war. As a base for military exercises and training of servicemen, it was a hub of activity throughout the war years. The latest in a series of Enrichment visits by pupils of all ages across the school, the outing afforded our younger children the opportunity to plant out saplings grown from seeds sown by students in 2016. Having been nurtured by our children since planting, once fully grown the 600 Crab Apple, Field Maple and Hornbeam specimens will truly be ‘Freemen’s Trees’. Our young students were incredibly honoured to be part of this historic planting in what is a fitting tribute to the former Freemen’s pupils who so bravely gave their lives in the Great War.